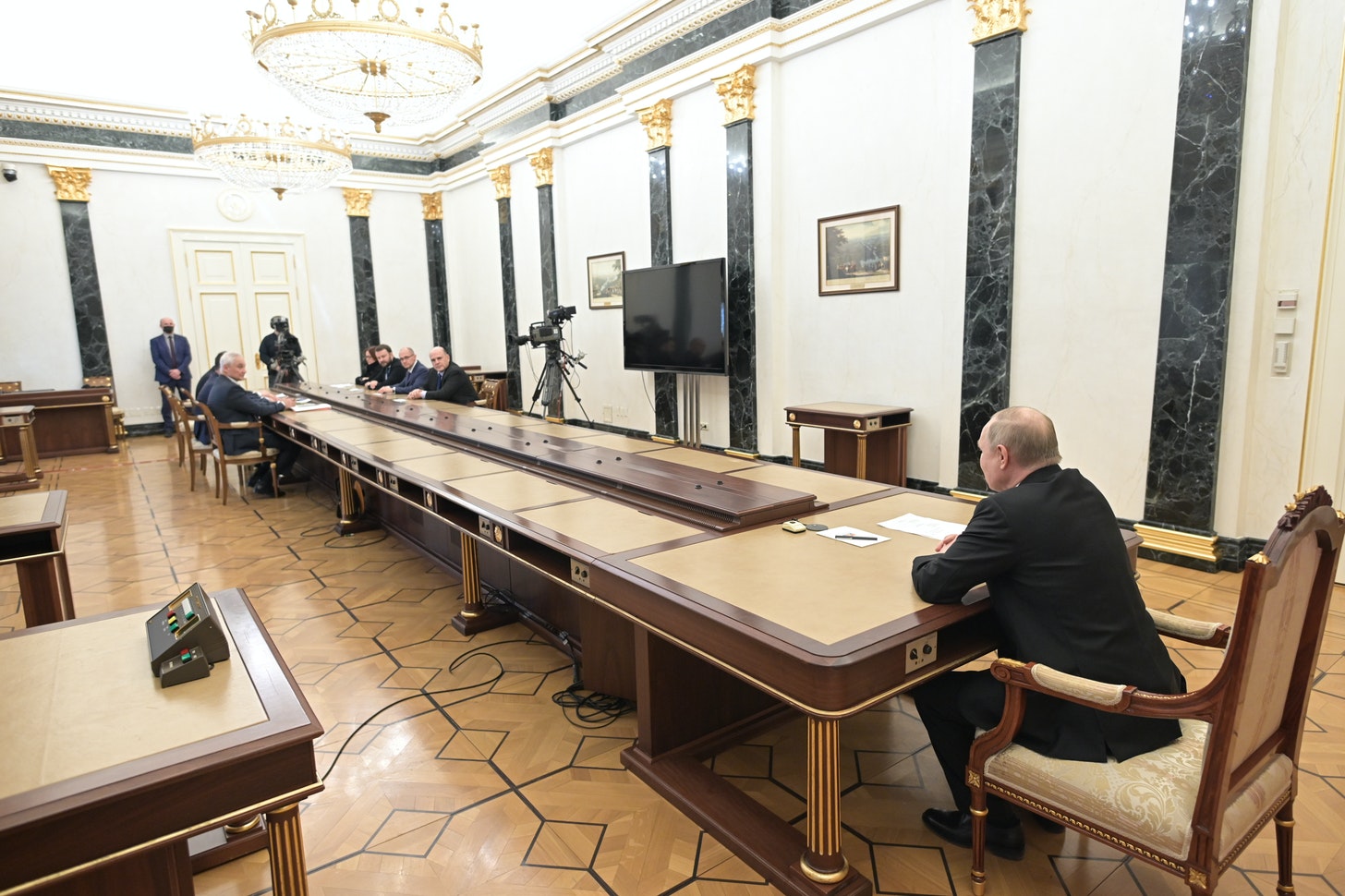 The scene reminded me of something you might expect to see in a film showcasing the legendary knights of the round table. The problem was that the table was not round and the knights were Kremlin bigwigs who were not so much gathered around a table, as stuck at the far end of it.

In this case, the king was Vladimir Putin, self-styled Tsar of a neo-Russian empire. He was sitting at the far end of a table in a gilded hall. On the other end were seated those he deemed important enough to grace him with their presence.

At first glance, the distance between Putin and the others might be chalked up to social distancing. With COVID still around, Putin wants to keep his distance from others as much as possible. The Russian state reportedly spent $85 million dollars on measures to protect Putin from catching COVID over the past two years. Fear of COVID is also a symptom of Putin’s biggest problem. The longer Putin has stayed in power, the more isolated he has become.  COVID was not something Putin, a man who has tightly controlled Russia for the past 23 years, was willing to take any chances with. COVID could kill him, something a man who usually holds the power of life and death over others must have found terrifying.

Vladimir’s Vulnerabilities – An Ever Growing List of Enemies
A former member of the KGB and later head of its successor the FSB, Putin has made a career out of paranoia. Practicing a policy of do unto others before they do something to you. This is how he has dealt with those brazen enough to oppose his rule. He could not do that with Covid. Thus, the usually secretive Putin became ever more detached from everyday reality. He closed the circle around him, including as few people as possible. The list of those able to influence him is mercilessly short. Crony and confidante are interchangeable terms that best describe Putin’s inner circle. This isolation may have been one of the most decisive factors in his disastrous decision making that has brought so much misery to Ukraine and Russia to the point of no return in less than a month. Putin’s arch-nemesis and leader of the de facto opposition to his rule, Alexei Navalny, once referred to Putin as, “Grandpa in a bunker.” He just might be the most dangerous “grandpa” the world has ever seen. Whether physically, mentally, or perhaps both, Putin exudes a bunker mentality these days. A man alone in a fortress of his own making.

From what little is known of his private life during the past two years leading up to his launch of the Russian Invasion of Ukraine, Putin seemed to practice his own special kind of self-quarantine. One where he used all the resources of the state for his own personal safety. The only resource he did not use was the vaccine his regime promoted. Putin is nothing if not a contradiction, a strongman who is said to fear for his and his family’s security. A man who can never retire from head of his supposedly all powerful regime because it would likely mean death at the hands of someone he has wronged. The list of would-be assassins out to take Putin’s life and/or usurpers who would do the same to his rule must run into the tens of thousands, if not more. Millions more in Ukraine would love to get their hands on him. Putin is a man with an ever-growing list of enemies.

Putin is aware of his vulnerability, which has increased exponentially since he unilaterally decided to attack Ukraine. He is said to have not one, but two teams for his personal security. Earlier this year, he reportedly replaced the one thousand strong retinue which is tasked with everything from doing his laundry to preparing his meals. Putin believes he can never be too careful. He is also said to have people now taste his food before he will eat anything. Putin seems to be most worried about protecting himself. Ironically, throwing caution to the wind and his country’s military forces into a war that is proving unwinnable increased his vulnerability.

Risky Business – No Time For Caution
If Putin had acted with the same caution in committing to an invasion, that he does to protecting himself, he would not have gotten himself into this Ukraine mess in the first place. Conversely, what is Vladimir Putin if he is not proving himself to others and by extension, projecting Russian to the world. It is the constant attempts to project strength that expose Putin’s perpetual weakness. From a psychological standpoint, every one of the wars that Putin has committed Russia to fighting were as much about shoring up his fragile sense of strength, as they were making Russia into a power that needed to be reckoned with. In this regard, the personal has always been inextricably intertwined with the political.

While the international community treats Putin as both a pariah and the most dangerous person alive, it is worth asking who should fear him the most? Europeans, Americans, or Russians? By all accounts, Vladimir Putin has strengthened the security and unity of Ukraine, NATO, the European Union, and the rest of the world’s democracies all due to his disastrous decision to invade Ukraine. Conversely, Putin has weakened Russia irreparably. The costs for his “special military operation” will continue to come due in the weeks, months, and years ahead for the Russian people. This will stoke instability at home, one of Putin’s deepest fears. A rising of the masses may not be probable, but it is now plausible. That is enough to cause Putin to react out of fear. A terrible prospect for Russia’s citizenry.

Threat Assessment – Insecurity & Isolation
Putin was already isolating himself before the war, now its disastrous conduct is likely to isolate him further from voices of reason. If the few who had direct contacts with Putin before the war were only telling him what he wanted to hear before, then imagine anyone trying to tell an angry and wounded Putin the harsh truth after this debacle. Those closest to Putin have as much to fear from him, as he does from them. Putin does not know who exactly may be out to get him, but everyone in Russia knows that Putin could get them. This self-reinforcing paranoia could prove fatal. Exactly for whom is a question that will soon become apparent.