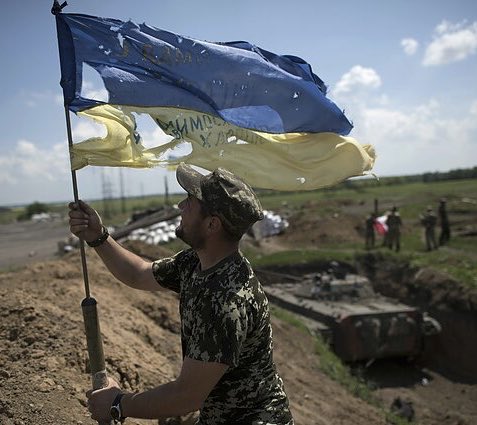 Sometimes history brings about realizations that only make sense in retrospect. So it was, when I tried to think back to a time before the Russian invasion of Ukraine began. A time before I woke up during the night to check news of the latest abomination visited upon innocents.

A time before I could imagine the Ukrainians surviving the Russian onslaught. A time before I exchanged messages with a Ukrainian friend who replied to my inquiry about her family by simply saying they were still alive. A time before another message I exchanged with a Ukrainian who ended the conversation by stating the sirens were calling everyone back to a bomb shelter. A time before there was a war in Ukraine. That time existed only 46 days ago, though it seems more like 46 years. With that in mind, I can only imagine what it must feel like for the forty-four million Ukrainians whose lives have been thrown into chaos by the war. The beginning of the war must seem so distance as to be almost unimaginable and the end so far away that it is still all but inconceivable. In war, time does not heal all wounds as much as it adds new ones.

A Clock With No Hands – Moments Rather Than Minutes
It is said that war changes everything, that includes one’s sense of time which gets warped dramatically. Days, weeks, and months become meaningless. Hours, minutes, and seconds mean less than survival. The time it takes for traveling to a bomb shelter, to procure supplies that sustain life, to make a phone call to family or friends ensuring that they are still alive, mark moments rather than minutes. The same is true for the time between when an attack begins, and an explosion upends. The daily rhythms of life before February 24th were all but obliterated. Hands fell off the clocks in Ukraine as soon as the invasion began. A strange new reality came to consume anyone’s life touched by the war. Even for those of us who are an ocean away in comparative safety, the war seems sinister and surreal. How could this be happening? The idea of war crimes in Europe seems so twentieth century, rather than the everyday occurrence they have become in the Ukraine-Russia war.

I never thought this would happen, at least not again, not in Ukraine. Had it not suffered enough warfare during the first half of the 20th century? Had it not suffered enough economic upheaval in the second half of the 20th century? Had it not suffered enough political upheaval since independence? One can always hope. Wishful thinking and naivete colored my view of Ukraine prior to February 24th. I told myself that the revolutions in 2004 and 2014 were peaceful. The poisoned face of Victor Yuschenko said otherwise, the documentary Winter on Fire revealed the violence. People died, but I told myself that was no great number, not like the violence that had been visited upon Ukraine in the two World Wars, the Russian Civil War and the famine. I kidded myself that Ukraine was for the most part peaceful. Why I had been there and back no less than three times. When I stepped off trains in Lviv and Kyiv, there was nothing menacing about the place. My only fear was of the unknown.

Parallels & Pitfalls – Signs of Danger
Now I realize with the gift of hindsight and knowledge of the region’s history that the Ukrainians have once again become the playthings of imperial and ideological ambitions. Russia in the 21st century is a dangerous nation, filled with misplaced pride, a seething sense of grievance and led astray by a mendacious megalomaniac who wants to write himself into history. This sounds all too familiar for anyone who studied World War II on the Eastern Front. Back then, Ukraine was squeezed between two of the most vile and deadly regimes in human history during the war, Hitler’s Nazi Germany and Stalin’s Soviet Union. Putin’s Russia is a step cousin of those regimes, degrading whatever and whomever it touches. The parallels between present and past are never perfect, but this one has the ring of truth to it.

In a creepy sort of way, I have been reminded of this lately by a visceral memory that keeps coming back to me from my second trip to Ukraine, one in which I made the day trip with a friend from Lviv to Przemysl across the border in Poland. As the bus made its way westward on that winter morning, I can still recall looking through dirty windows at a barren landscape of leafless trees cloaked in a thin veil of morning mist. I wondered, in a combination of historical fascination and morbid curiosity, how such a benign looking landscape could have been the scene of so much murder during the World Wars, particularly the second one. The situation was now normal or at least that was what I wanted to believe. Ukraine might not be in the European Union, but it was close enough. Russia seemed impossibly distant, even though they supported a low intensity war in the Donbas. That seemed to be nothing compared to the excesses which had occurred here during World War II.

Everything Has Changed – Nothing Has Changed
In an average looking landscape tens of thousands were mowed down in what is now known as the Holocaust by Bullets. I could not imagine this happening in such a normal place. It was a historical oddity in my mind. I now realize the folly of that way of thinking. The hatred visited on the inhabitants of Ukraine now, is not that far removed from that of the past. Rabid nationalism, a leader spewing angry lies and medieval levels of violence are the commonalities between the past and present situation in Ukraine. I have come to the realization that everything has changed and nothing has changed. 2022 looks much like 1941 just on a smaller scale, and 1941 must have once looked like 1914. War has a way of warping time. The past no longer seems impossible. The present situation in Ukraine is the ultimate reminder.