Russia separates Ukraine from the sea 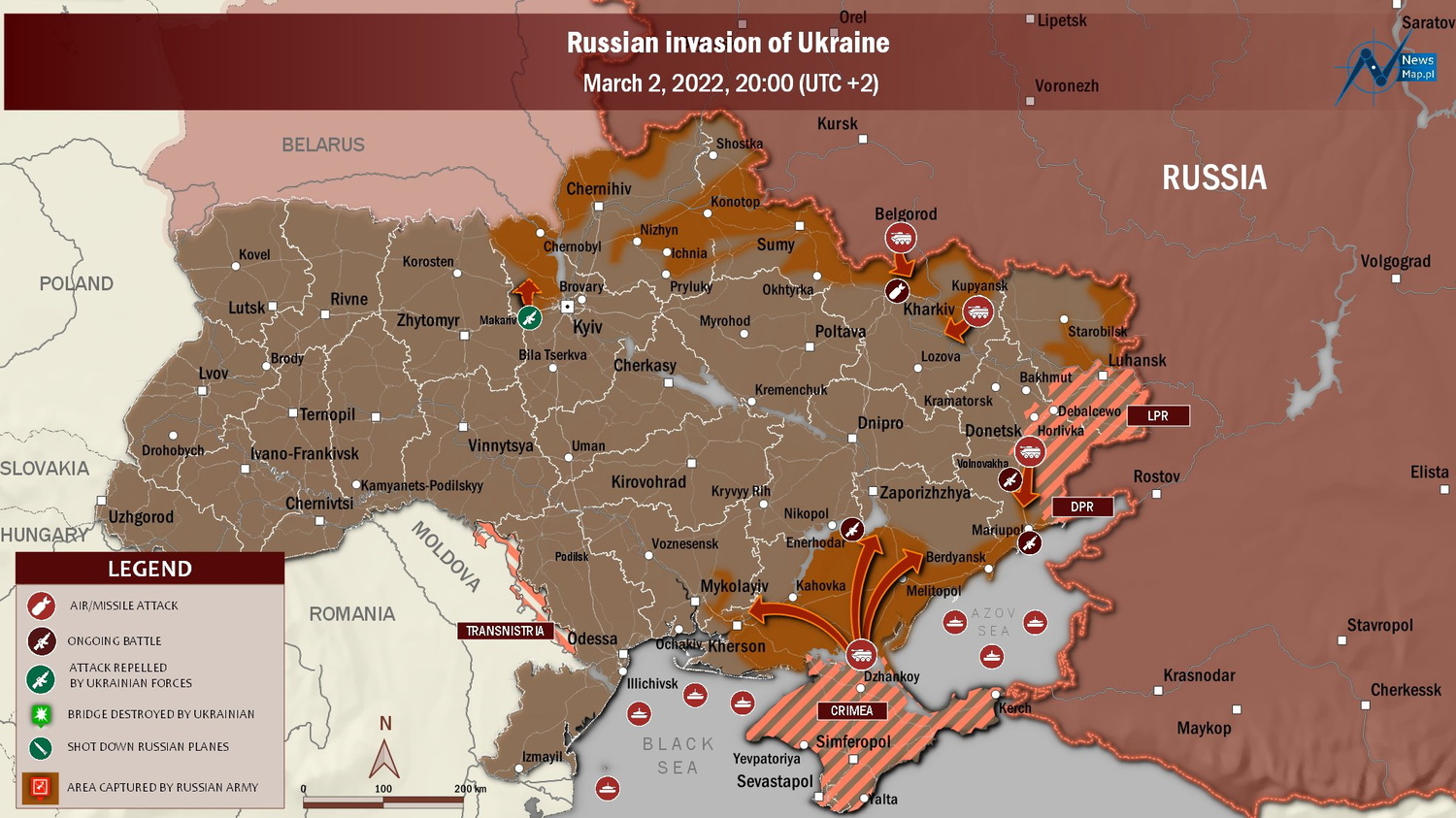 In the coming week, the Russian army will concentrate its main actions in the southern regions of Ukraine, which directly threaten its territorial integrity.

The tactics of the Russian troops during its invasion of Ukraine showed two strategic directions in which the Russian army concentrated the main forces and means: an attack on Kyiv from the north and northeast using the territory of Belarus as a bridgehead and a transshipment base, an attack on the southern regions of Ukraine from the territory Crimea and L/DNR. Any of these areas is of strategic value for the Russian Federation in the context of its goals. The capture of Kiev will help to set the image value of the war against Ukraine, to manifest to the world community the thesis that “the capital has fallen, and therefore the government too.” The occupation of the southern regions is also extremely important for the Russian Federation, because it allows solving several strategic goals: cutting off Ukraine from access to the seas, depriving it of ports, taking control of two Ukrainian nuclear power plants in the Mykolayiv and Zaporizhzhia regions, turning this into a lever of pressure on Kiev in the context of electricity supplies (an analogy with the supply of water to the Crimea after 2014) and also by integrating the electrical system of the southern regions of Ukraine into the so-called “Crimean energy bridge “, connected with the Krasnodar Territory and the Rostov Region of the Russian Federation, to create a prototype of a ” quasi -ORDLO” from the PMR to Novopskov under the full control of the Russian Federation , spreading Kremlin propaganda and pro-Russian narratives there.

Russia used different offensive tactics, which in general came down to three different approaches: an attempt to surround the city (Kyiv), an attempt to break the resistance with massive shelling , regardless of casualties and destruction (Chernihiv, Sumy, Kharkiv, Mariupil), an attempt to take the city “by soft power “or bypass from the rear (Kherson, Energodar, Kakhovka, Odessa, Mykolayiv). In particular, in the Zaporizhia, Kherson and Mykolayiv regions, Russian troops are trying to surround strategically important cities, control the road routes along which they are trying to advance along the Kherson – Mykolayiv – Pivdennoukrayinsk line in order to establish control over the South Ukrainian nuclear power plant and access to the border with the PMR. This tactic makes it possible to separate Odesa from the rest of Ukraine virtually without a fight, which is confirmed by the fact that the Russian Federation did not make significant attempts to take Odesa by force, unlike Mariupil , the storming of which resulted in unprecedented loss of life and destruction.

Therefore, in the near future, Russia will attempt to seize the South Ukrainian nuclear power plant with further advance deep into the southern regions of Ukraine to create a strategically important belt from the PMR to the southern borders of the Kharkiv region, by analogy with the Anaconda Loop geopolitical strategy, which consists in blocking communications from the sea, with stopping resource potential and trade and economic component of the state. This is one of the most difficult challenges for the Ukrainian army in the short term. The mass transfer of the Ukrainian army and weapons from other sectors of the front will immediately cause an attack by Russian troops on the opened sectors of the front. Realizing that significant resources are concentrated on the outskirts of Kyiv, Russia is trying to use its tactical advantage in the south for the sake of maximizing the capture of these territories. If the Russian Federation manages to seize these territories under its control, this will mean enormous economic and demographic losses for Ukraine, as well as sharply increased military threats from the Russian Federation, which will be able to threaten the central regions and Kyiv on three fronts, a blow to the electricity sector of Ukraine.

At the level of big politics, Russia is trying to thematically “devalue” the issue of Crimea’s ownership and the status of the “L/DPR” by seizing larger territories with the establishment of pro-Russian puppet regimes in them according to the previously tested principle of the “republics” of Donbass. The capture of the southern regions of Ukraine also neutralizes the concept of negotiations between Ukraine and Russia in their current format, because it will provide Russia with additional leverage, which it uses as a means of bargaining.