The geopolitical project of Intermarium: from the collective fear to social capital 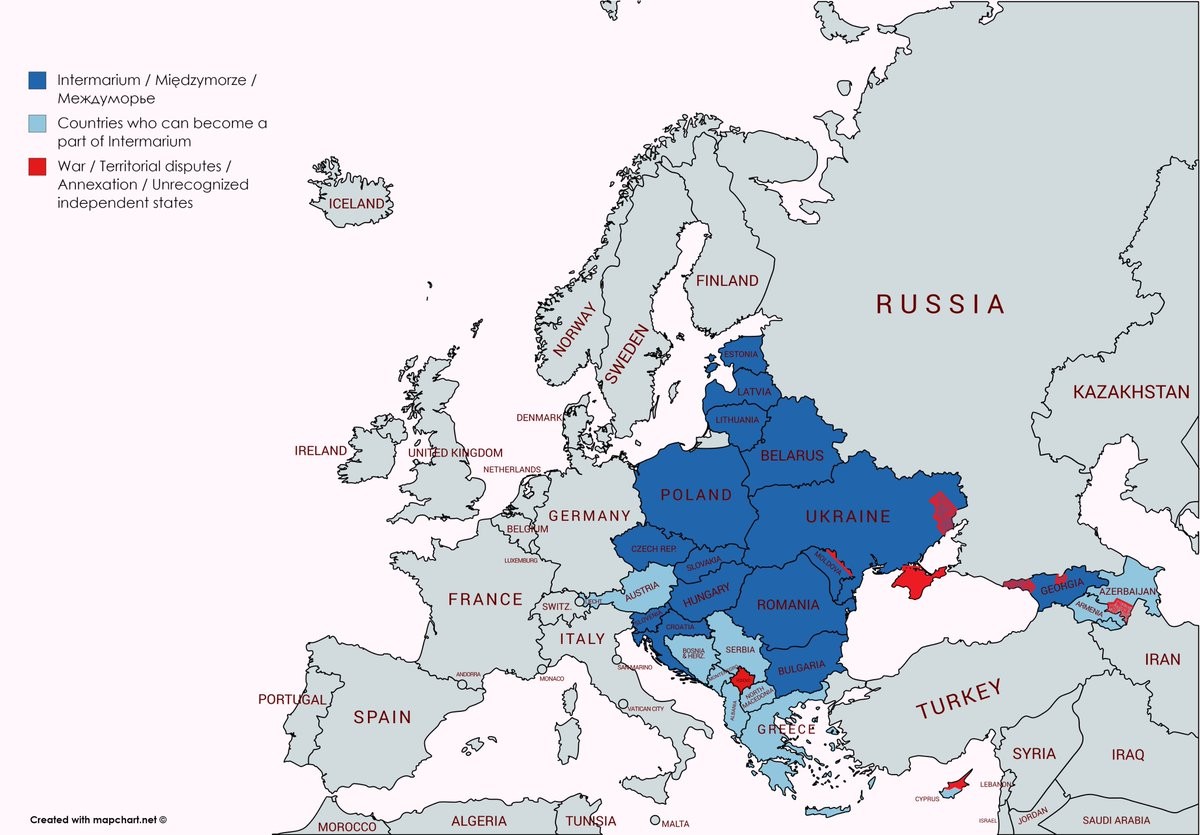 Collective action, according to the classics of sociology, can take place either on the basis of common values, guidelines and aspirations – what connects and bonds social groups or entire countries and what we now call social capital, or on the basis of fear of a common threat or enemy.

According to the theorists of social Darwinism, the individuals or groups can unite facing an existential threat and cooperate, turning a blind eye to the past controversy. Once the threat is gone, cooperation is reduced to a minimum. Transferring this theory to geopolitical ground, the Intermarium project (“Between-Seas”, the Three Seas Initiative, etc.) often arose in the past as a consequence of collective fear, rather than as a manifestation of trust in neighbors and common values. Unfortunately, in 2020 Intermarium is based on the principles of collective fear, not social capital.

For the countries close to the border with Russia, or those which until recently were in the same socialist bloc, Russia acts as a “scarecrow”, the predator that forces other animals of the “geopolitical forest” cooperate in order to survive. To complete this overview of social Darwinism and the theory of the state as Friedrich Ratzel’s organism, it should be stated that Intermarium has not yet created the effective social capital at the collective level that we could talk about at the level of international relations or domestic social sentiment.

This is a rather simplified and alternative analytical framework of the Intermarium project, which includes close political, social, economic and cultural relations between the countries situated amid the three seas. The problems connected with the weak economic basis within such a union, as well as different societies, historical contradictions between the countries and political elites are obvious and very acute.

For the Intermarium countries, the transition from collective fear to social capital is a difficult task. If we analyze the triangle Ukraine–Romania–Republic of Moldova separately, it is difficult to talk about a high level of trust between these countries, the economic projects are not a priority, and societies still live by historical resentments that do not allow building a stable system of cooperation.

Historical past is also a stumbling block in relations between Ukraine and Poland, between Hungary and Romania, between the countries of the Balkan Peninsula and so on. The tragic pages of the past do not allow us to look optimistically at the geopolitical project Intermarium in terms of its sustainability and social capital. That is, the form without proper content is being built, and the economic resources needed to compensate these social niches are clearly not enough.

In 2020, the 5th Summit of the Three Seas Initiative took place in Tallinn, where the issue of significant expansion of the Three Seas Initiative Fund for the implementation of joint projects was discussed. The fund consists of contributions from the development banks of Poland and Romania, as well as Latvia and Estonia. Bulgaria, Croatia, Slovenia, Hungary and Lithuania will take part in capitalization the fund. The United States promised to add $ 300 million to the fund, which includes $ 1.3 billion with the possibility of expanding to $ 4 billion.

Thus, under the sponsorship of the United States, some EU countries participating in the Intermarium project will be involved into the projects of the Three Seas Initiative Fund for the implementation of transport, infrastructure and energy projects along the north-south axis.

After the summit in October 2020, the experts from Ukraine, Belarus and Moldova expressed their discontent regarding the fact that this fund, which is really needed to strengthen the Intermarium, is mainly for the EU member states, and this may result in some isolation of the former Soviet republics. De facto, the Three Seas Initiative Fund is based on rather pragmatic goals and cooperation between the EU and NATO countries. The attempts of Poland to discuss the possible involvement of Ukraine in this format have failed due to a certain distrust (returning to the issue of social capital) to the former Soviet Union countries regarding their ability to effectively implement ambitious projects.

In my point, the fragmentation of the Intermarium into 1) the Economic Intermarium – with the Fund for Development of the EU and NATO countries only and 2) the Security Intermarium – with close cooperation at the level of Ministries of Defense and Security Services, would be a big mistake, a false start of this project.

Without the prospects for development and only on the basis of discussions without further steps to deepen the cooperation, Intermarium will not be an attractive project for the post-Soviet societies seeking new geopolitical and geo-economic landmarks (possible rapprochement with Russia, China, India, etc.). This will be used by other international actors who are already involved in the internal and external fragmentation of the Intermarium members through fake news, hybrid warfare, economic diplomacy, cultural diplomacy, sowing distrust of neighbors and provoking conflicts within and between the CEE countries.

In other words, despite the interesting and meaningful talks about the Intermarium, this geopolitical project is only at the launching phase with clear geopolitical contours, but without clear economic or political boundaries. The accumulation of social capital in the relations between the countries of Intermarum requires efforts to bring together information spaces, support civil society institutions and widely implement projects in the field of security and economic development. Otherwise, the Europe at different speeds of development will have the Intermarium at different speeds, but also with a high risk that the countries that lag far behind the group will no longer feel as a part of a single international community and they will move in the opposite direction.